Amsterdam city tour with Marken, Volendam and the windmills

based on 20 reviews
Free cancellation

You will see by luxurious coach, the old and new parts of this beautiful city with its many historical buildings and interesting sights. For example you will get to know the Royal Palace, the National Monument, the Skinny Bridge, the Albert Cuyp market and the beautiful houses along the canals. You will also visit a windmill on the Amstel river and a stop will be made at a diamond factory where you will see the traditional way of polishing.

After your lunch (not included) you will continue to Marken, Volendam and the windmills. This second part of the tour shows the typical Dutch countryside of polders and little canals on the way to the Zaanse Schans, a well-known windmill village with many interesting windmills. You will be visiting a wooden shoemaker here. Then you'll move on to the world-famous fishing villages of Volendam and Marken - on the coast of the former Zuiderzee (now called Ijselmeer), with its wooden houses and locals wearing their national costumes. On the way, you will stop at one of the very few cheese farms, where the cheese is still made in the traditional way.

Check in at least 30 minutes prior to the beginning of the tour at the tour operator's office in the Central Station’s IJ hall (on the far eastern side).

What to remember
Read more
When
Read more
Provider
Lindbergh
Booking fee
Good news! No extra fees are applied to this booking.
Cancellation policy
Receive a 100% refund if you cancel up to 1 day before the experience begins. 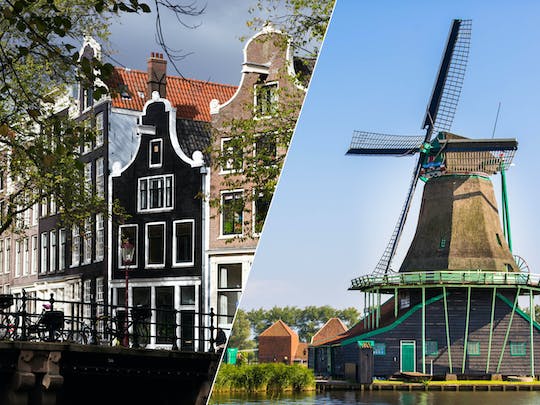 Amsterdam city tour with Marken, Volendam and the windmills
(20)

Book your one-hour canal cruise in Amsterdam and admire the UNESCO-protected canal district and learn about the city's amazing sights and history.