Changing of the Guard walking tour in London

Along the way, your local London tour guide will explain each step of the Changing of the Guard ceremony process as you watch the Queen's Foot Guards, the Household Cavalry, and the Regimental Musical Bands march towards Buckingham Palace in one of the most inspiring and traditional British events in all its pomp and pageantry.

With a small group (maximum 10 people) you'll also learn about key London tourist attractions near Buckingham Palace including St James's Palace and Clarence House as well as visit the heartland of British Royalty and Government in Parliament Square where you'll see and learn about Big Ben, Westminster Abbey and the Houses of Parliament.

The Changing of the Guard offers some of the best London sightseeing opportunities, with this London walking tour being one of the must-do sightseeing tours in London.

Meeting point:
The tour starts outside The Ritz Hotel on the corner of Piccadilly and Arlington Street. The address of The Ritz Hotel is: 150 Piccadilly, St. James's, London W1J 9BR. If travelling by London Underground then the closest station is Green Park Station (Jubilee, Victoria and Piccadilly lines). Green Park Station is approximately a 2 minute walk to the start point. On arrival please look for your tour guide holding the yellow umbrella.
What to remember
Read more
Provider
See The Sights Tours
Booking fee
Good news! No extra fees are applied to this booking.
Cancellation policy
Receive a 100% refund if you cancel up to 24 hours before the experience begins. 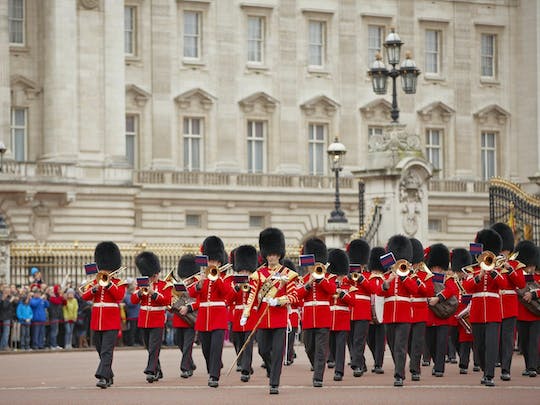 Changing of the Guard walking tour in London