Availability: Every day except Monday

Embark on a fascinating voyage back in time on this Ostia Antica tour, and explore the magnificently preserved remains of the Roman Empire’s most important port. Just half an hour from the Eternal City by train, the vast ruins of Ostia Antica rival Pompeii for their size and incredible state of preservation. Wandering through buildings still rich with traces of everyday life and decorated with wonderful mosaics, frescoes and statues, discover what it was really like to live in an ancient Roman town over two millennia ago. Learn why the harbour city of Ostia was a vital cog in the massive machinery of the Roman empire while enjoying a walk in the Roman countryside, surrounded by umbrella pines and swaying cypress trees. During the tour, you will get the chance to admire houses, temples and baths including the House of Diana, the Theater of Ostia, the Forum, the Temple of Venus and the Baths of Neptune.

Meeting point:
Outside the Piramide metro station
What to remember
Read more
Provider
Through Eternity
Booking fee
Good news! No extra fees are applied to this booking.
Cancellation policy
Receive a 100% refund if you cancel up to 1 day before the experience begins. 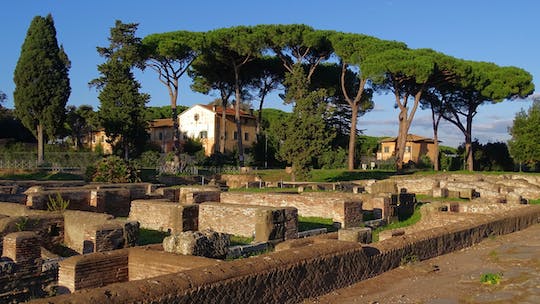