Availability: Every day except Monday

Discover the archaeological site of Ostia Antica and its well-preserved ruins, proof of the power of the Roman Empire!

Your guide, who will be waiting for you at the site's main entrance, will show you the quiet and less crowded places and disclose secrets and engaging tales about this coastal town, raised by Anco Marzio, fourth king of Rome. The site also includes a Roman baths complex and an amphitheater that you will get the chance to visit. Learn about Ostia's fundamental role in the shaping of imperial Rome's economic strength and how the place worked as main way through which goods came to Rome from the outer regions of the Empire.

Meeting point:
At Ostia Antica train station. From Piramide (line B) metro station, take the train Roma-Lido and get off at Ostia Antica stop. Your guide will be there waiting for you
What to remember
Read more
Provider
Vivicos International Travel
Booking fee
Good news! No extra fees are applied to this booking.
Cancellation policy
Receive a 100% refund if you cancel up to 3 days before the experience begins. 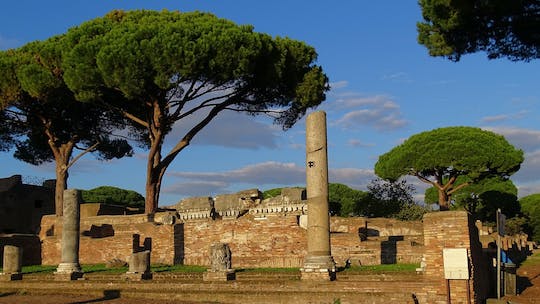