Availability: Every day except Sunday

Hidden below the trampled cobblestone streets of Rome, lives a mysterious underworld dating back as far as the 6th century BC. Discover lesser-known underground areas of the Eternal City and unveil the history of Rome's Paleo-Christian phase.

Begin your discovery from the Church of Santa Cecilia. It is believed that the church was originally built upon Saint Cecilia's house, whereas the Baptistry was uncovered along with houses dating back to Ancient Rome times and that were used as foundations of the now existing church. While exploring the area admire a very unique fresco dating back to Medieval times and resembling the Sistine Chapel's famous "Last Judgement".

Moving on among the charming streets of Trastevere, you'll come across the Church of San Crisogono. Access the 4th-century Titular church, get to see its perfectly-preserved underground alter, dating back to the time of Constantine; visit the remains of Ancient Roman houses and discover the ruins of what could have been a public laundry room, due to the great number of basins found during excavation.

Meeting point:
- This tour offers pick up service from Rome's accommodations. Directly contact your local tour operator to provide your pick up address; you will find their contact in the voucher after booking
What to remember
Read more
When

Every day except Sunday at 9.00am

Read more
Provider
Studio Associato Eyes of Rome
Booking fee
Good news! No extra fees are applied to this booking.
Cancellation policy
Receive a 100% refund if you cancel up to 1 day before the experience begins. 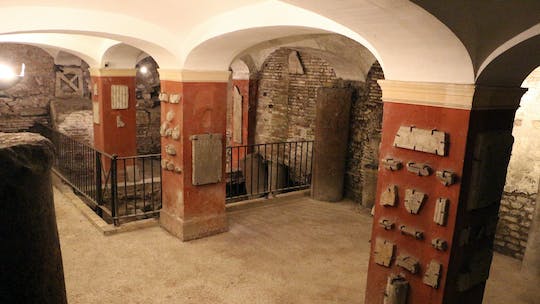