Famously nicknamed "Melting Pot", New York offers incredible diversity, with 8 million inhabitants and over 800 languages spoken in its streets. Get ready for a full immersion into its colorful mix of cultures with this 7-hour guided bike tour!

You'll start in Queens at Gantry State Park. In addition to its breathtaking views of the midtown Manhattan skyline, this area had a critical role in the city's commerce in the first part of the 20th century. You'll then cycle down to Brooklyn, where you'll encounter the most dramatic example of New York’s ethnic mosaic—Williamsburg—home to the orthodox Jewish community. In Greenpoint, another Brooklyn neighborhood, you’ll discover the thriving Polish community that honors its roots with native cuisine and language. You'll also visit the Lower East Side of Manhattan, where early and recent arrivals from Europe, Latin America, and China blend in with assimilated New Yorkers. We are sure this all-encompassing tour won't disappoint you!

Meeting point:
Check-in is 15 minutes prior to the booked tour start time at Unlimited Biking - Central Park
What to remember
Read more
Provider
Unlimited Biking
Booking fee
Good news! No extra fees are applied to this booking.
Cancellation policy
Receive a 100% refund if you cancel up to 24 hours before the experience begins. 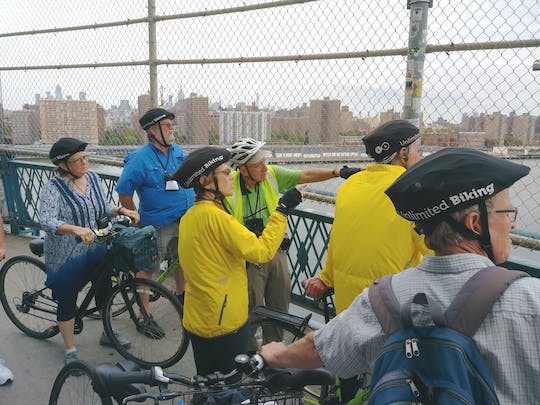 Buy your Empire State Building tickets with us and admire NYC from the 86th-floor Observatory. Buy express pass tickets for a more efficient entry!

Save 38% on six of New York's top attractions with the CityPASS, including the Empire State building, Statue of Liberty, 9/11 Museum and much more.